how to photograph your mermaid

A day trip is fun, but it’s more fun with mermaids…

Chestertown Maryland is known for Colonial history & architecture, galleries, a cool river to kayak or sail on, and this… 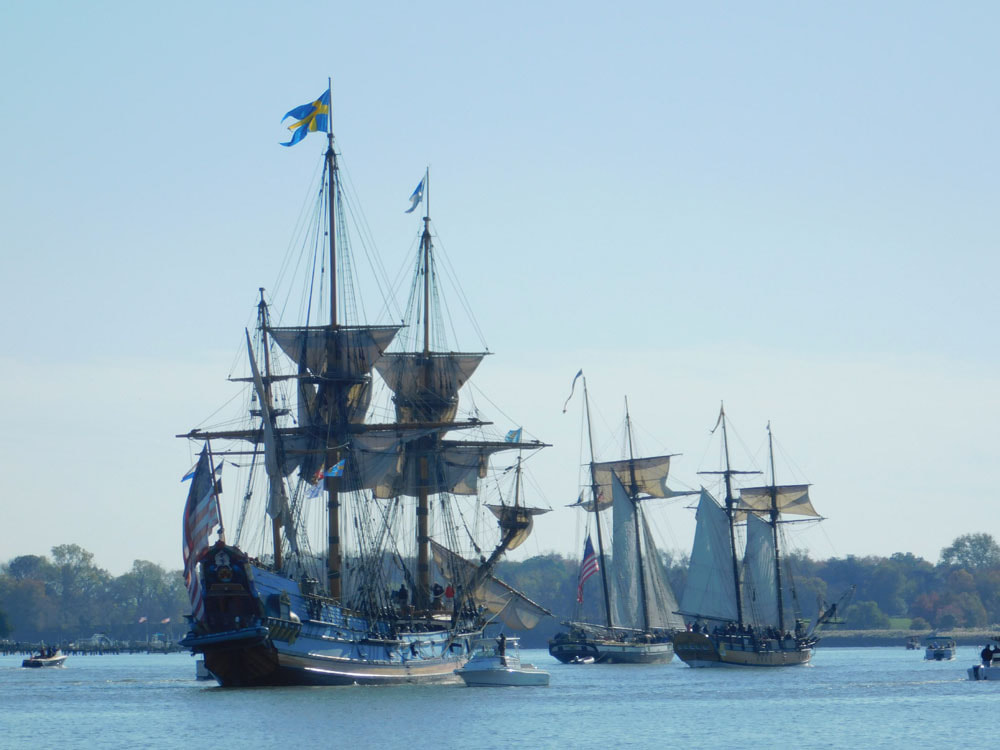 …Halloween Weekend, a whole bunch of “pirate ships” show up and turn the waterfront into a forest of masts.

Sailing on a ship and being in the middle of a floating timeline is cool. Photographing that is cool. Setting your tripod up at dusk to catch this… 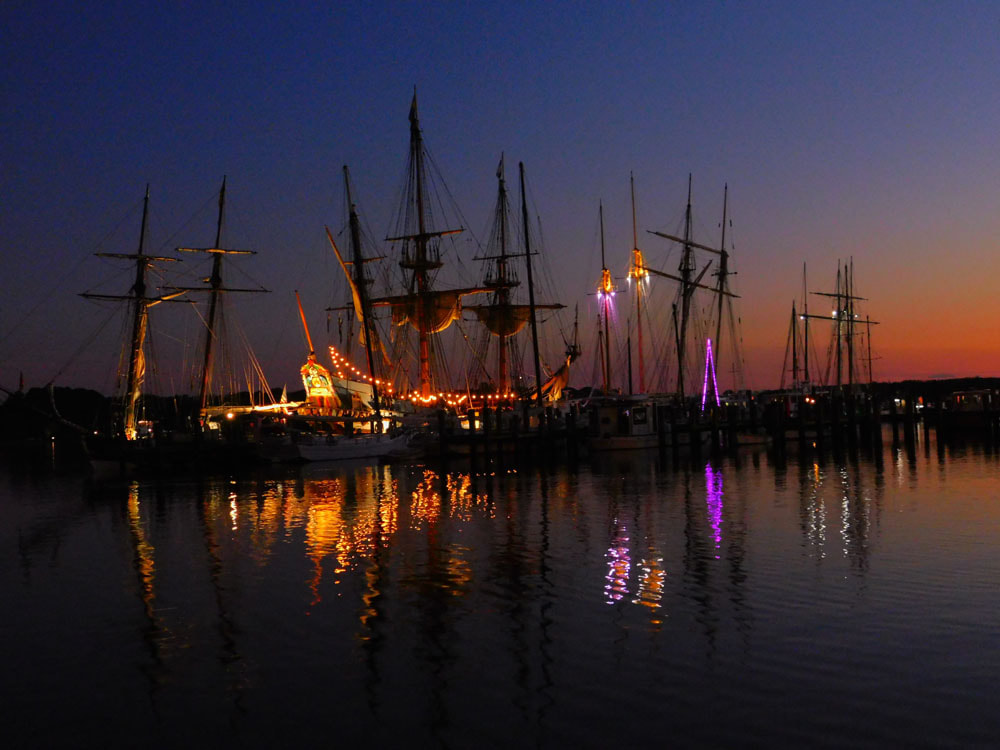 is cool. But it’s even more fun to do the journey from the point of view of a mermaid. 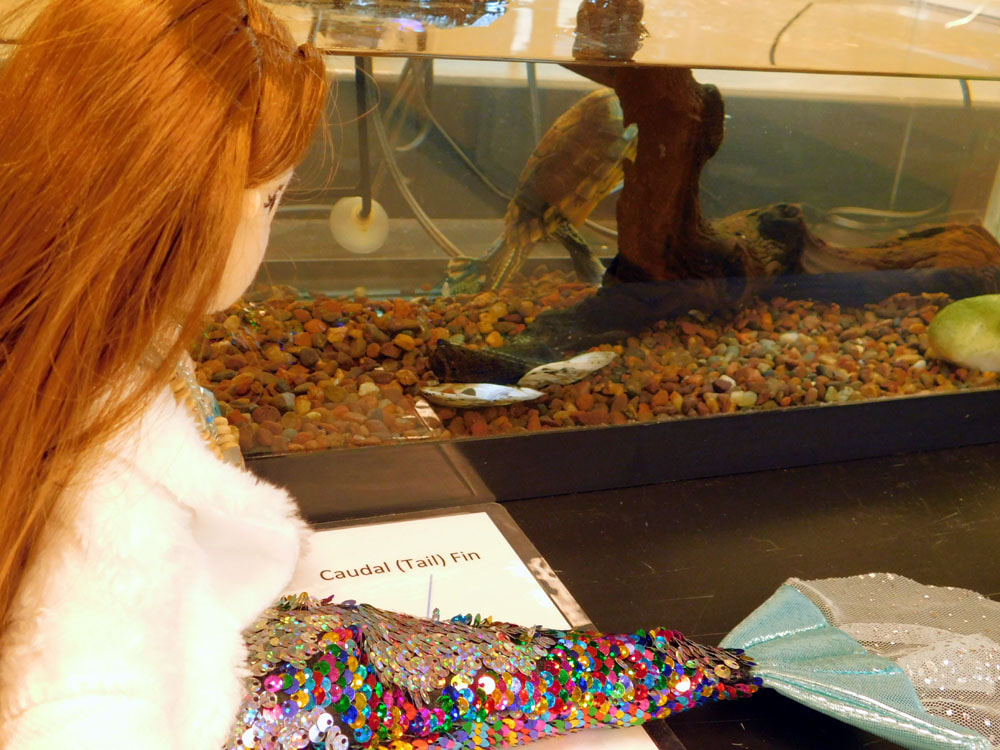 (I seriously did NOT see the “caudal fin” sign by her, well, caudal fin, until I brought this up in Photoshop. The “caudal fin” part is perfectly framed, in this case, by accident, but moments like this can add humor to your story.)

Of course, she needs a way to get around on land, because these mermaids do not shift shape… 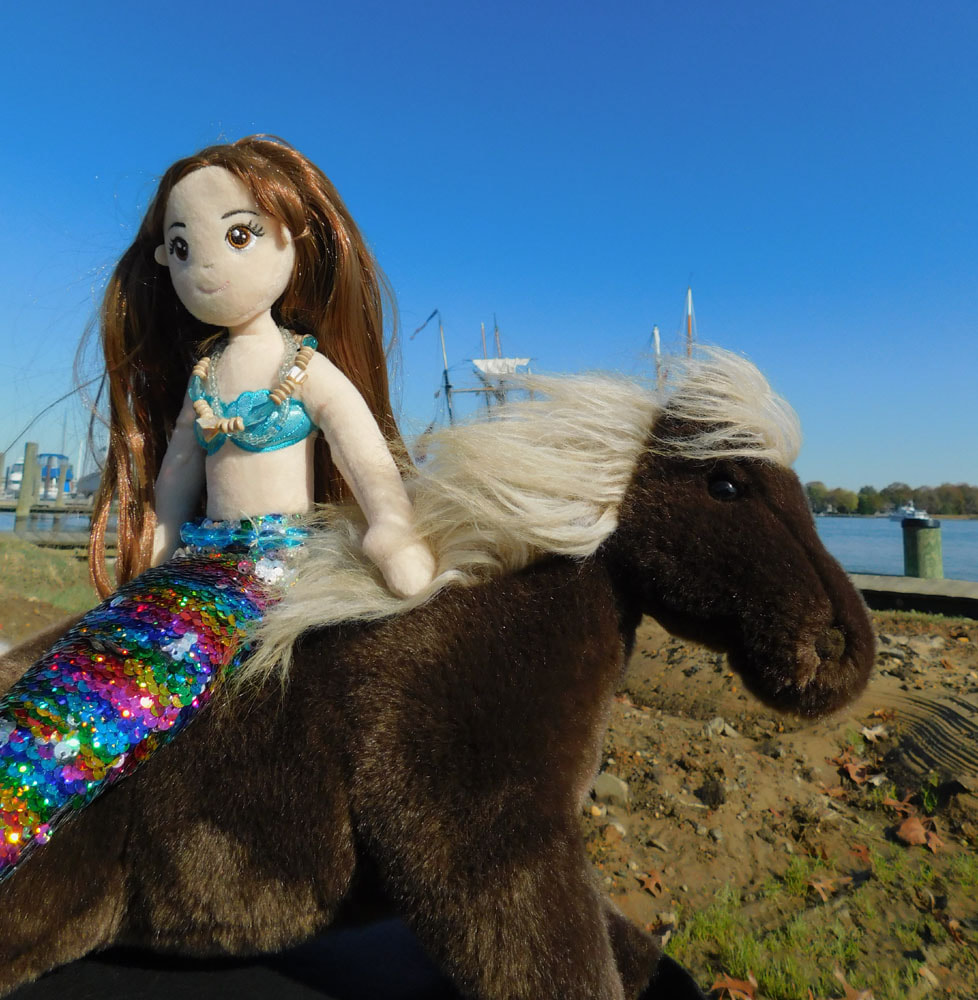 Mermaid Courtnee came from Chincoteague Island. She’s made by Aurora (their mermaids are awesome), a friend found her in a display at the T-Shirt Factory. She resembles Courtney Mermaid, aka the Vancouver Mermaid, one of the mers I follow online. https://www.youtube.com/channel/UCIB50Dx297bwahIG2ZLScLA

Some of the Aurora mermaids have yarn hair, some have “real” hair, either makes for fun photographs. They are flexible plush and posable.

Gingersnap the Chincoteague pony was found in a plushie bin at a thrift shop (Community Aid in Hanover PA). She cost all of 50 cents. She is the same dark chestnut with flaxen mane and tail as several Chincoteague ponies, including the famous Surfer’s Riptide and, actually, the mare Gingersnap. She’a wee bit posable. The faux fur mane actually blows in the wind, and you can brush it into windblown shapes too. Mermaids don’t slip as much on plush ponies as on the plastic ones.

I’ve used several kinds of horses and other creatures (ask me about the bunny sled) to convey mermaids on land. 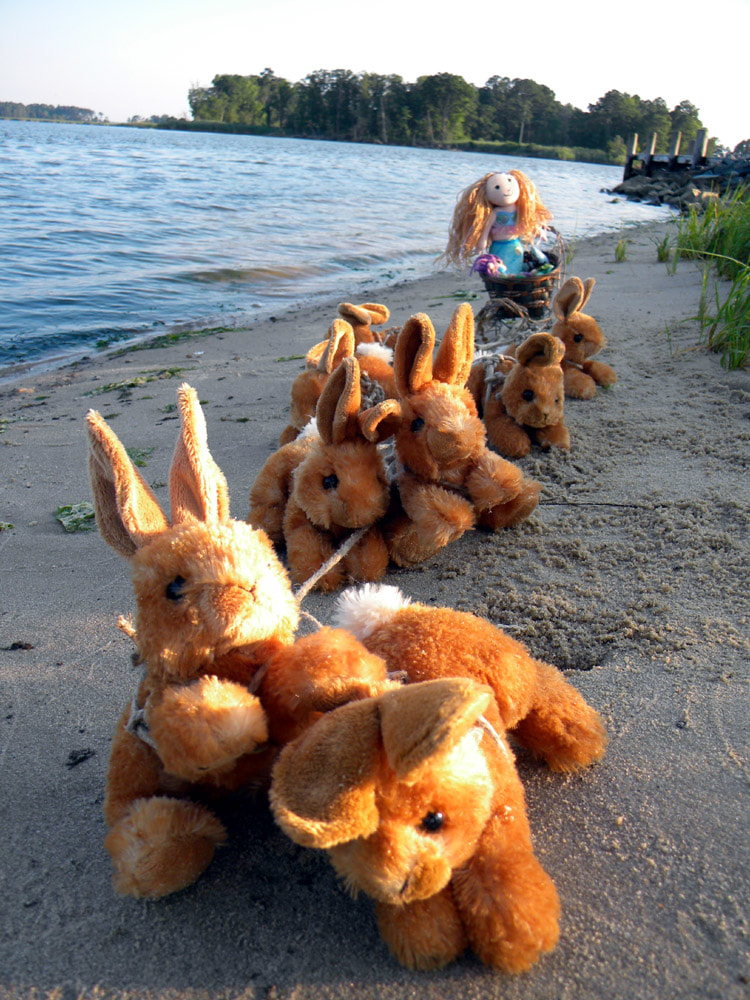 (The idea came from the Hobbit movie. The harnesses are authentic x-back dogsledding harnesses made by me out of heavy twine. The sled is a thrift shop find, modified to have more authentic looking runners and a brush bow.)

The plastic horses can’t be posed, but some have “real” hair that bows nicely in the wind, and if you change the angle of the horse, and the camera, they can take on different expressions. Below, two “Our Generation” horses, repainted. 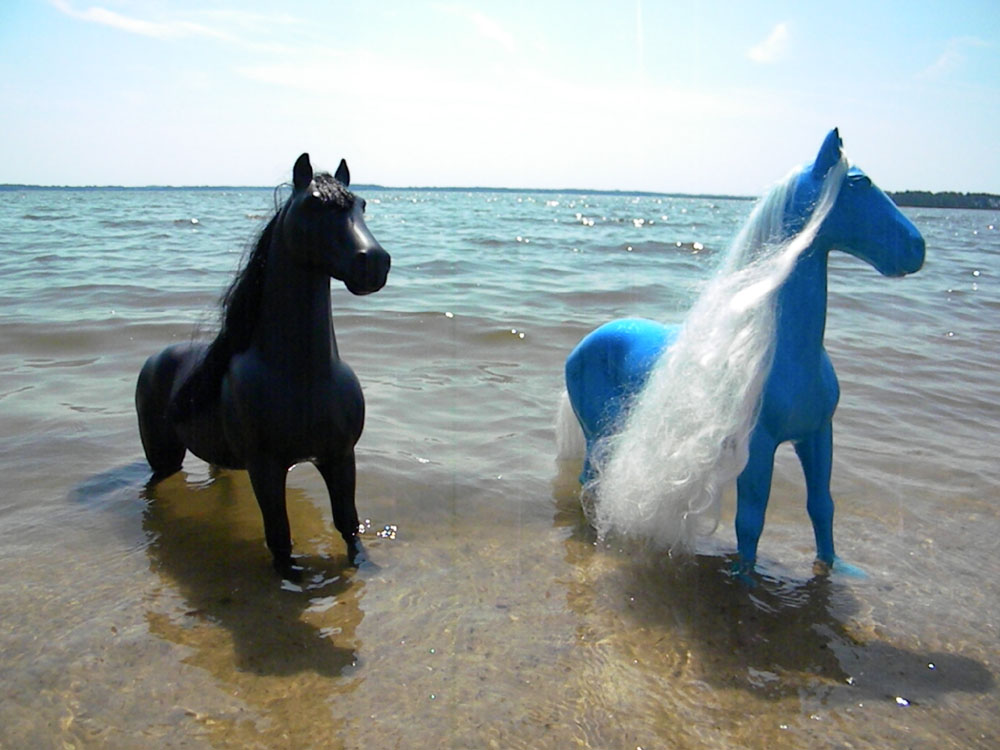 You can also actually put them in the water without damage. 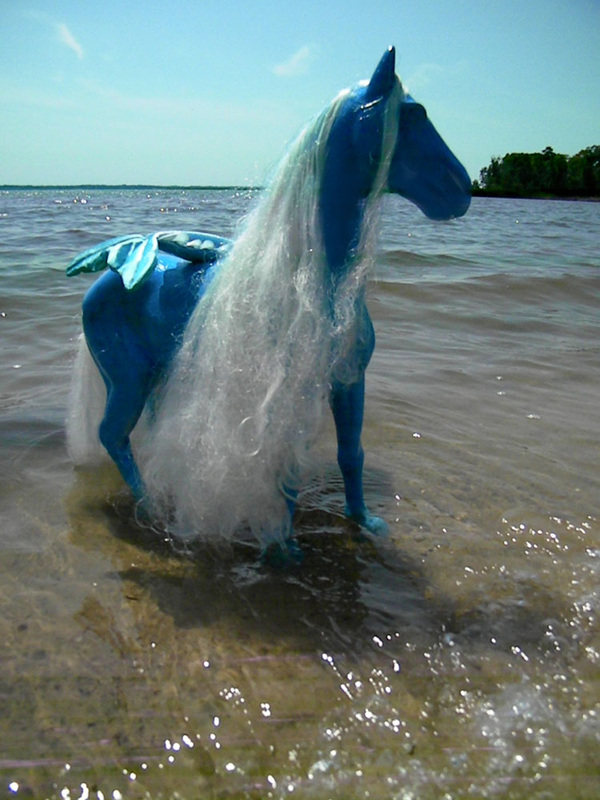 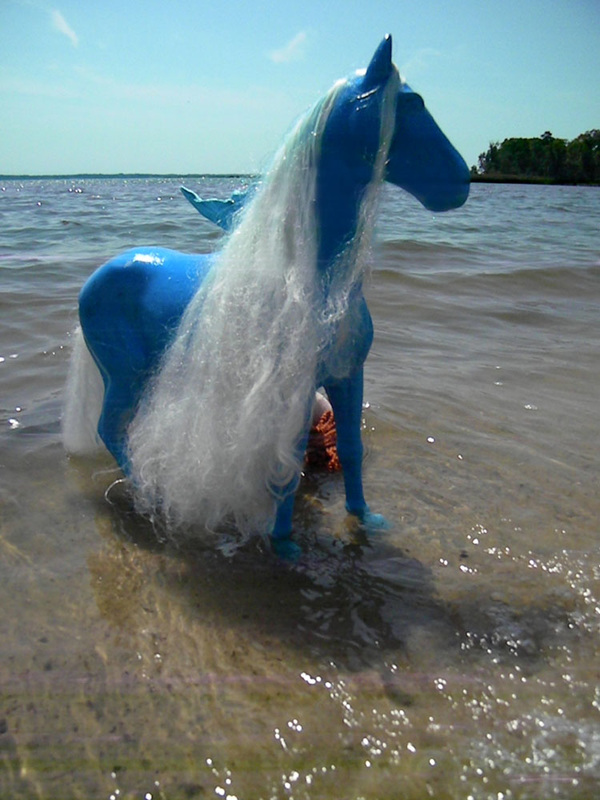 Mermaids are another tail… tale. They tend to fall off the slippery “sea horses”. At least they are small enough to dry fast.

I have tried saddles… (Johnny West horses from the 60s, repainted) 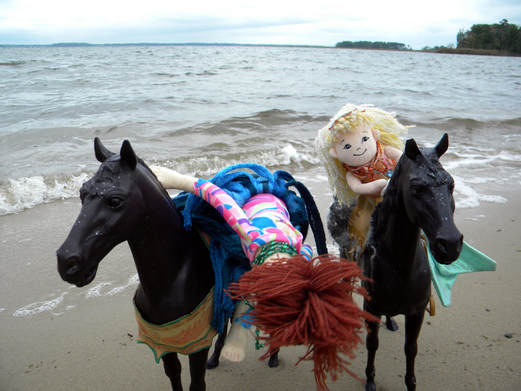 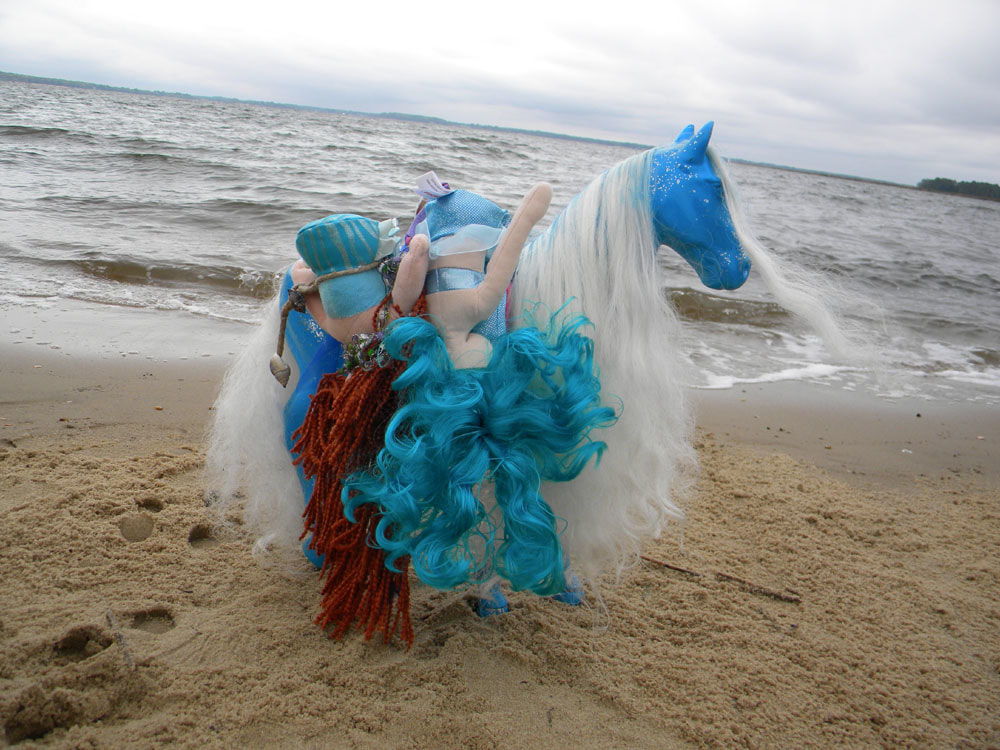 It works, except in a wind good enough for sailing… 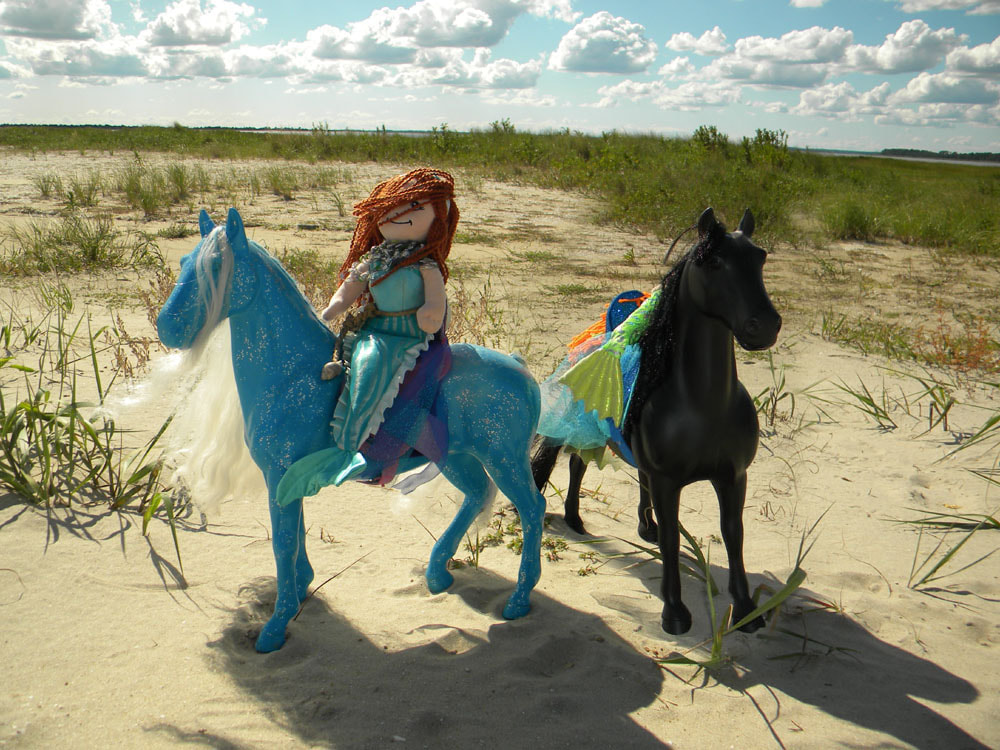 Dowel rods sunk in the sand help hold up your models. 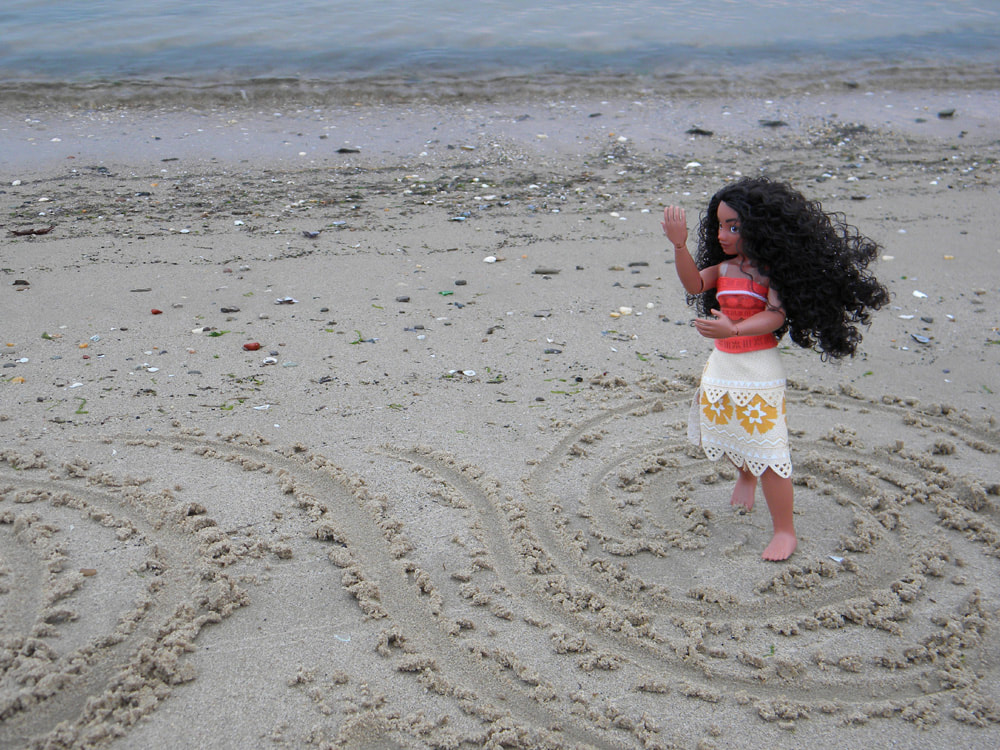 You can Photoshop them out later. Or hide them.

Pipe cleaners are useful: attach dowels to models, or wrap around arms so you can pose your model, or tie model to horse… 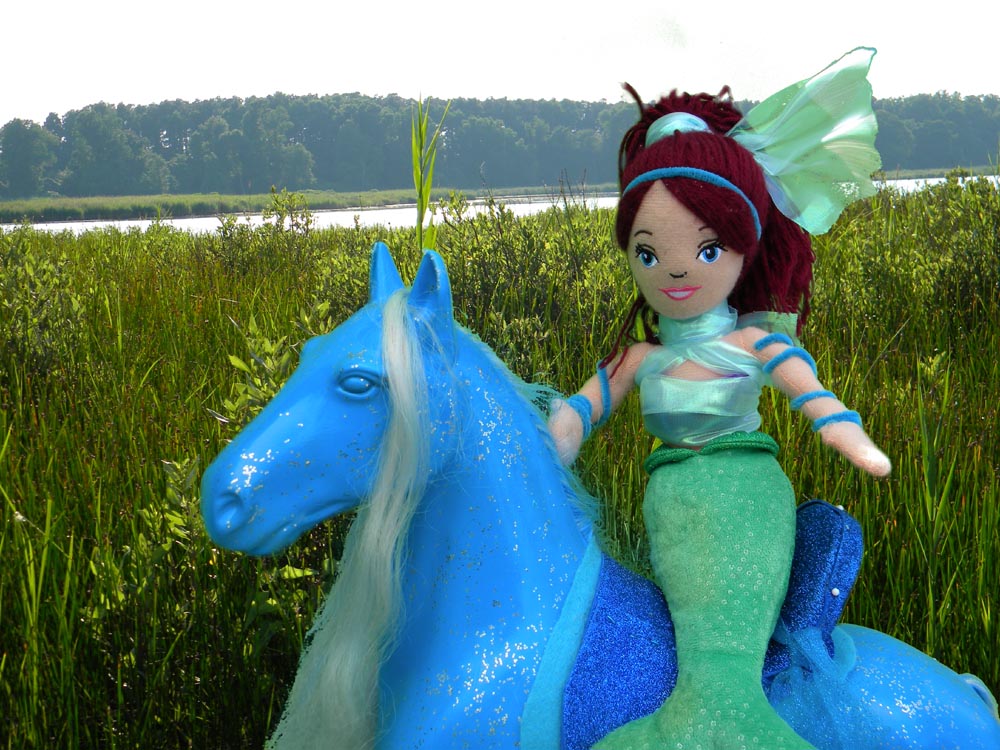 You can shoot your model on green(or blue or whatever) screen and Photoshop it into your on location pic later, but it’s more fun, and gets more authentic lighting, to set up the model on location. I did this shot with the pony and mermaid on a tripod seat: a cane that folds out into a seat. I simply Photoshopped out the little bits of the seat that were visible later. 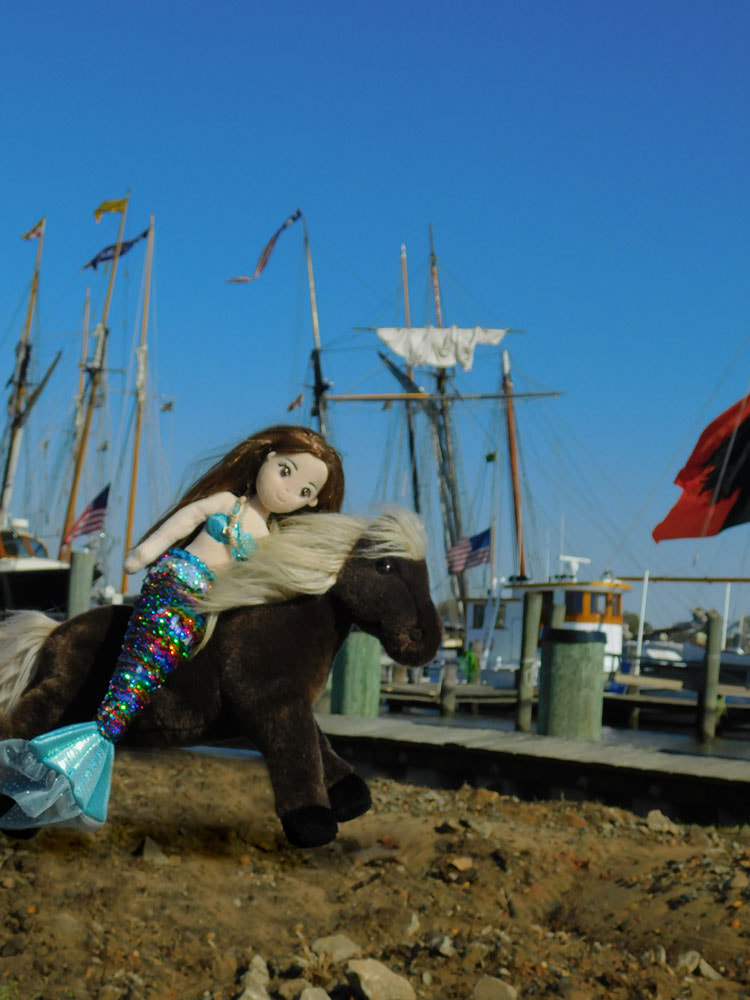 Below, they are just perched on the seat. This raises the camera’s eyeline up, making the models look bigger. You are shooting from the perspective of a few feet above the ground rather than a few inches.

For most shots you should have the camera at the eye level of your model, otherwise it looks like a drone shot.

Of course sometimes it’s useful to have an aerial shot, as in this picture of Courtnee on the Chesapeake Bay map in the Sultana Education Center… 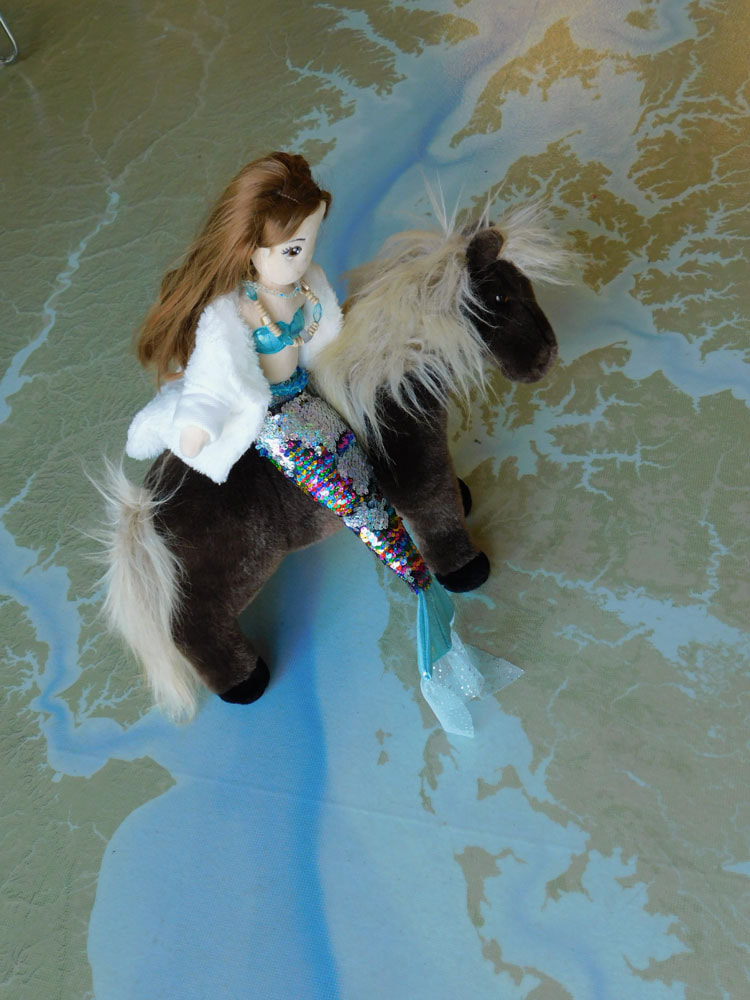 Mermaid hair must be heavier than pony hair, it doesn’t blow in the wind as much.

Courtnee also has a “mermaid scale” tail which can be brushed either way to show silver or rainbow. Or both. 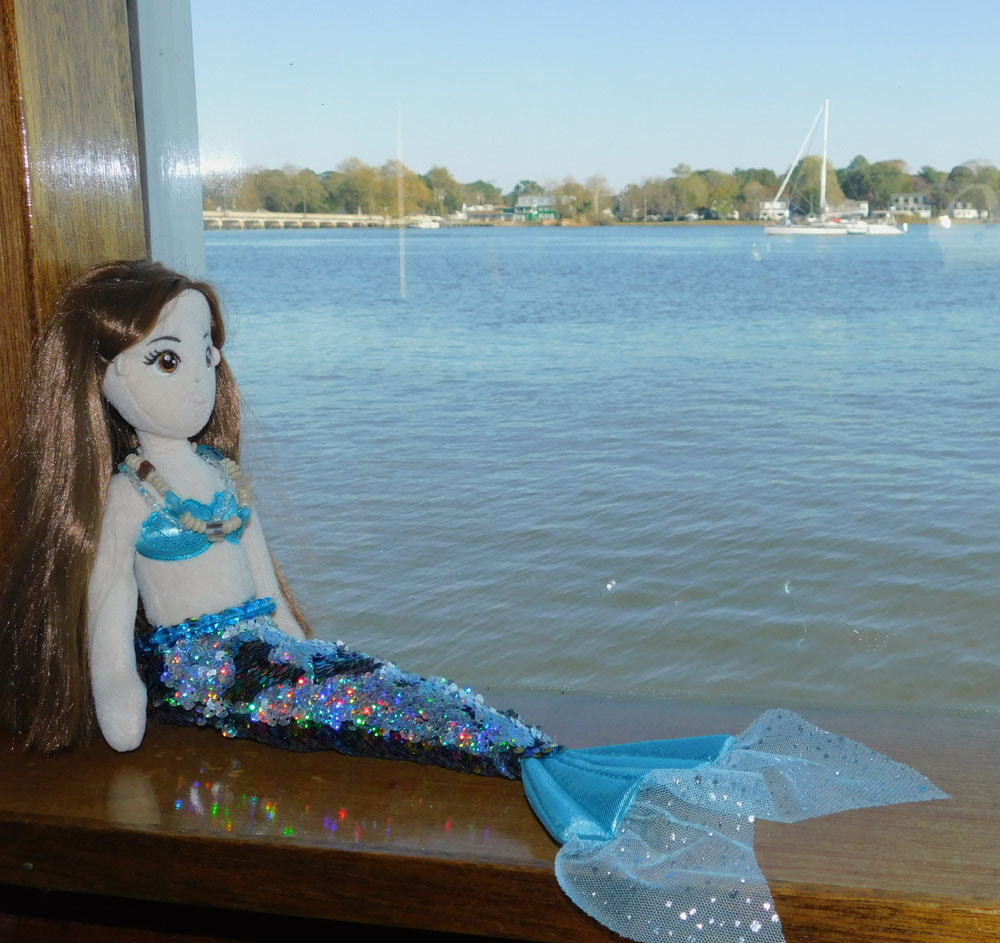 Don’t forget to add photos of what your mermaid saw too. She doesn’t have to be in every photo… 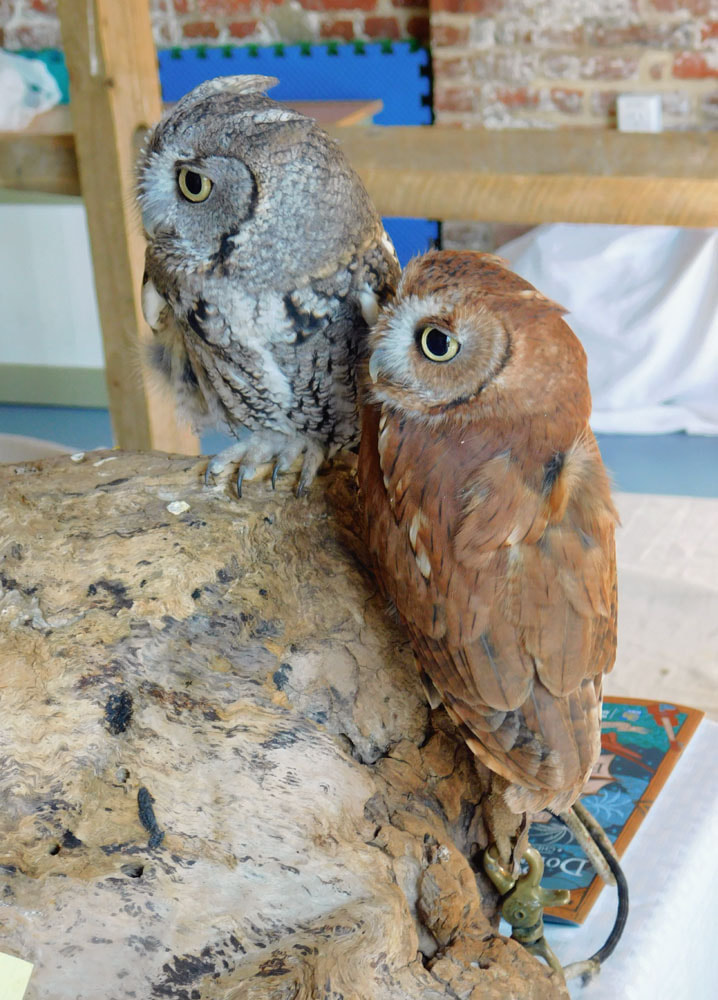 I carried the models in a re-useable shopping bag, easy to get in and out of, for those moments when you go: “hey, look at that! that would make a nice shot!”

So don’t let your toys sit on a shelf, take them on your next adventure.

More here on how to do it…